From: The Racing Addict To: The Industry Part 2

My second interview in my five part series is of a fellow racing addict: Katie Marie. She got into racing at the age of 16 after her first experience with Thoroughbreds came in the form of an honest, and willing OTTB. The thing she remembers most about him was his heart and how hard he tried to do what she asked of him. Katie began more intensive work with OTTBs and Thoroughbreds after a visit to the track with one of her friends when said friend was looking for a long lost horse. Katie was offered a job by a local trainer but ended up going in her free time to groom, walk, tack up, and even had the opportunity to gallop at the trainer’s farm. She’s had experience in every aspect of the industry, and even has her own OTTB named Simon. I gave her the same base question as Victoria, and then the interviewed differed from there.*

Pati: If racing could fix one problem immediately,  which problem would you like to see resolved first? Why?

Pati: So, in your opinion, what would be the ideal time to start them, and the ideal spacing in between races?

Katie: [I would] start at three, as in break them [around the same time] and then at two and a half, start training and then maybe race at three. Honestly, no more than two [races] a month would be my thing.

P: Do you see trainers running them that frequently at your local tracks?

K: Yeah, there where a few trainers that would race Saturday, put a horse back in on Wednesday, and run again the following Wednesday.

P: Do you know if the track took any action against it, or did social media have to harass them in a court of public opinion before they did something about it?

K: Nothing happened. It was at Suffolk. [Since] we are closed now except for our three races a year, those trainers don’t have the money to race in those races. [I have] no idea where they are now.

P: Is there something that you believe could’ve saved Suffolk from being closed?

K: People supporting us. We closed because we had no one coming to the track to bet, watch, or anything. All the bad media press on racing really hurt us which also made all our purses lower; we got the low life, cheap trainers who where just in it for the money and not the sport. [That] gave us an even worse name. When the survey went [out] to see who would get the casino (the only way we would have stayed open at that point) half the people voted for the other place strictly because of what I said above.

P: Was something missing from Suffolk that made it so that people weren’t attending or refusing to attend the races?

K: Not that I know of; I think it was [primarily] just like I said: so much bad press about the sport; no one wanted to support it. Think about it, all you hear is about the Triple Crown races, or the shit that happens with shitty trainers or a freak accident. Nothing good about the regular horses, nothing about the breed itself, and how they don’t wanna run. Well, you can’t make these animals do something they don’t wanna [do]. All the sport gets is bad or rich press and it hurts [a] track like Suffolk. We had no money to get a lot of out-of-state people coming to us and any press we did get was the bad shit.

P: Do you think a magazine for the locals about the breed, the good horses/trainers, and anything good about the breed would help potentially sway people to allow a new track to be built in the future?

K: I would hope so! There is talk about it [a new track being built] so that very well could help.

P: So, what would you like me to write about Simon?

K: We gotta talk about Simon! After the track’s [Suffolk] closing, I found her. [She was] skinny (600lbs underweight), had infected skin, worms, was scared, and untrusting. Now she’s 1,250lbs, healthy as a horse [no pun intended], and is in training to be an upper level eventer. But what happened to her was both sides of the sport: her first two trainers ran and ran and ran her. She got claimed, and then traded because the guy [who had claimed her] owed the previous trainer a lot of money. She ran her once, and Simon tied up after, so the trainer retired her. 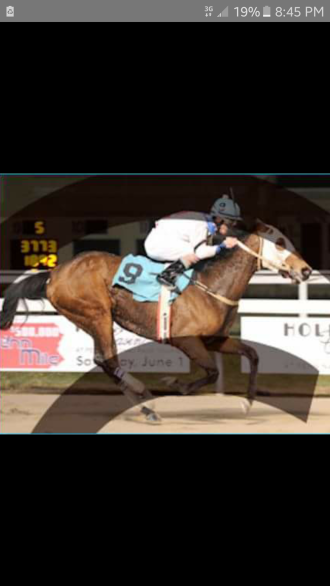 Simon in her racing days.

She had a lot of heart in the sport but the trainer didn’t want to push her anymore. The trainer sold Simon to a guy in MA [Massachusetts] for breeding (she’s a Henny Hughes baby, so she’s worth a little something). He did the same thing as the first two though: no grain as it made her too hot, no turnout time so she didn’t get hurt, and no visitors because he didn’t want her tampered with. It was all about the money.

Simon and Katie are meant for each other!

Now, thankfully, she’s with me and she’s allowed to be a horse and live out her dragon days as being so. (Dragon is a barn nickname for Simon.)

Once again, an interviewee brings up the issue around the bad press that racing gets from the general outlet sources and how racing continues to want to stay in the past. The more I spoke to her and my other interviewees, the more they emphasized that the industry needs to get a hold of its PR in every state with racing and take its future into its own hands.

While Suffolk didn’t have the firepower behind it like the big tracks such as Churchill and Santa Anita do, it makes a point that the public can be swayed; especially when racing won’t even defend itself in some places. Pretending these opposing voices don’t exist or that every opposing opinion written is by an uneducated person is going to get more and more places in trouble. Racing can be a great sport again to all (not just us hard core fans) and we can expand but none of our efforts will matter if we continue to be stuck in the 1990s’ in our approach to the fans and to how we address their concerns. Angry or mistrusting fans can mean seriously bad news, as we have seen with Suffolk.

We must control our own destinies again, and stop waiting until animal rights groups are ready to strangle us before racing changes something in the industry. The only thing that this serves to do is to make us look like the uneducated party; like we need someone to point out to us that we are doing bad. This is the oldest and most respected sport in some places in the world; it’s time we stop acting like we just formed in 2003. We’ve had decades in our current century to figure the problems out, and we continue to ignore them or react too late.

We must be the proactive party and we must support all levels of racing; not just the high end party weekends and big ticket races. We must support the smaller tracks so that they don’t fall into despair and weed out the trainers that think their horse is a machine. We have to be in this together. One for all.

Some of the answers are edited for spelling and clarity.

All the pictures are Katie’s. Please contact me and I will give you her information if you wish to reuse them.

A "long time" young fan of racing and traveling, I have set my sights on blogging about what I love most! Opinions are my own and there are plenty of them; engage at your own risk! View all posts by Pati

Look at that adorable Preservationist face! 😍 He’s standing his first year @airdriestud for $10,000.
%d bloggers like this: